Hey all, I've got some news that I felt like mentioning sooner than later.

First things first, I have planned out half the stuff I'm collecting during the Autumn/Q4 Pickup season. Some have been pre-ordered already, some have yet to be pre-ordered but will be when it's distributor updates its shop site and others will be planned until the time comes. Here's a good idea of what I have prepared for the next four to five months.

Incoming within the next week or two:
- C: The Money of Soul and Possibility Control
- Fractale
- Heroic Age

Other Notes:
- I may pick up some light novels and manga some point, titles like Berserk are in consideration while Another's deluxe novel release is being suggested.
- What I want to do for this season is to get a majority of the Limited Edition sets as usual before they go out of print. For the first time I'll be picking up Viz Media titles thanks to their special artbox sets (size-wise they're just smaller than the slim case Funimation artboxes) but at the same time I want to get the rest of the Funimation LE sets (not including the sets above, I now have about 9 more to collect).
- Thanks to Sentai Filmworks and Viz Media, collecting special sets are now more complicated. Highschool of the Dead Collector's Edition is still a maybe for now while Love, Chunibyo & Other Delusion will be picked up (always wanted to watch that series for quite some time). Baring in mind they cost as much as Aniplex's sets (like £75 as a Blu-ray/DVD combo pack).
- I spotted some Honneamise sets that I have some interest in, but I may skip on the special DVD sets since Manga UK are interested in releasing the Blu-ray versions.
- If a particular set is going out of print then chances are I will be getting it. This has happened before with various pickups; most notably Gunbuster vs Diebuster, Shakugan no Shana Season 2 Part 1 (LE) & 2, Shiki Part 1 (LE) & 2, Tenchi Muyo! OVA (LE).

Other than that, I'm now using Imgur for my unboxing pictures in case something happens. Some sets have been re-shot for a better angle or clearer picture. I'll be including all of my newer pickups on there (like the ones listed above) while at certain times I may add some catalog titles like my Anime Limited and NIS America pickups.

That's it for this update, stay tuned for the next pickup whenever it arrives.

UPDATE:
I have added/altered some sentences to make it clearer and look less rushed than before. Remember the ones I have planned may not be there in the end but might come up later on. And I still haven't forgotten about UN-GO, something I should get sooner than later.
at August 21, 2014 No comments:

The scorching saga continues with the second season of Shakugan no Shana. 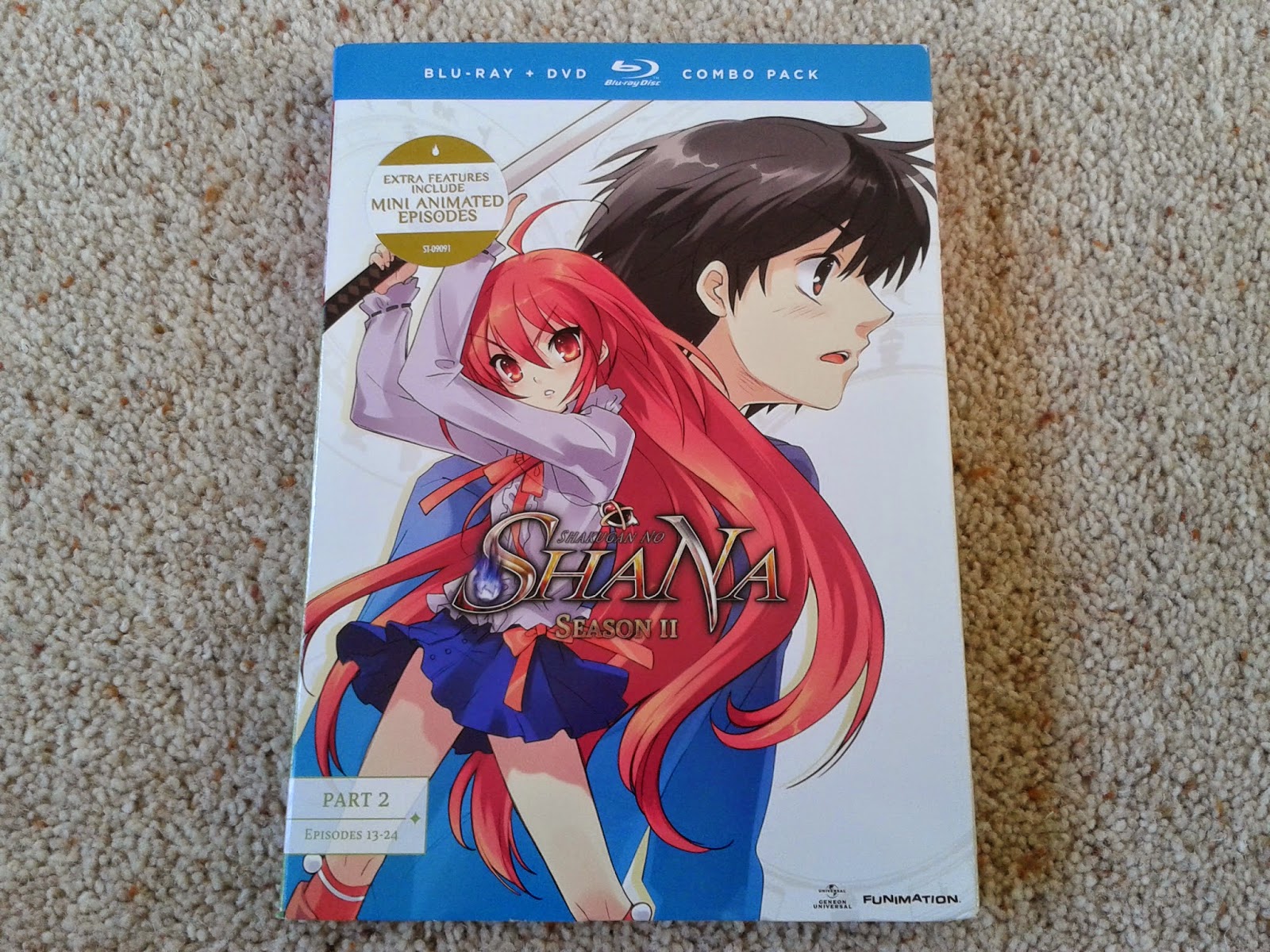 The scorching saga continues with the second season of Shakugan no Shana. 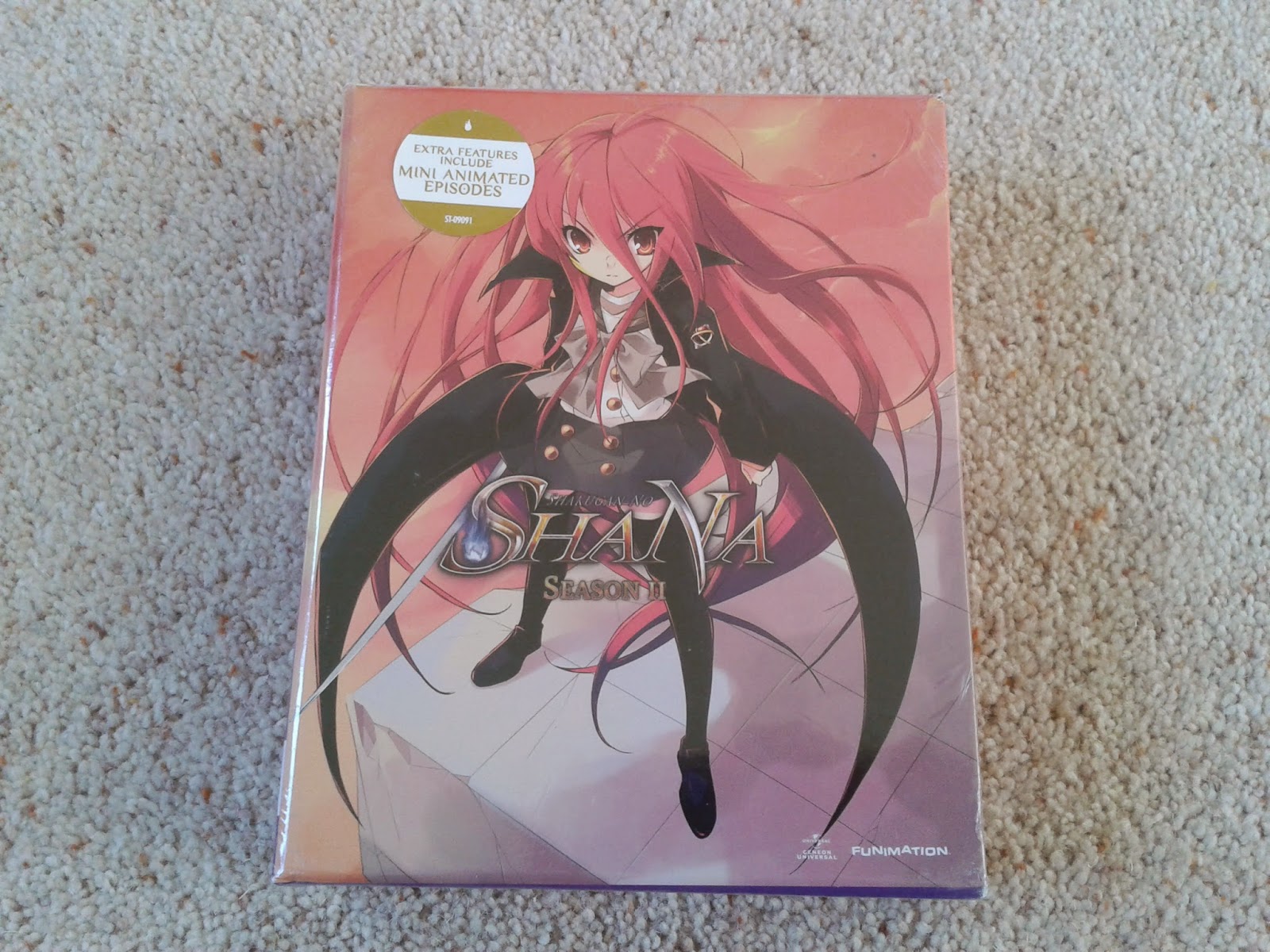 A particular Super Amazing Value Edition has entered my collection but this time it's not like any other. 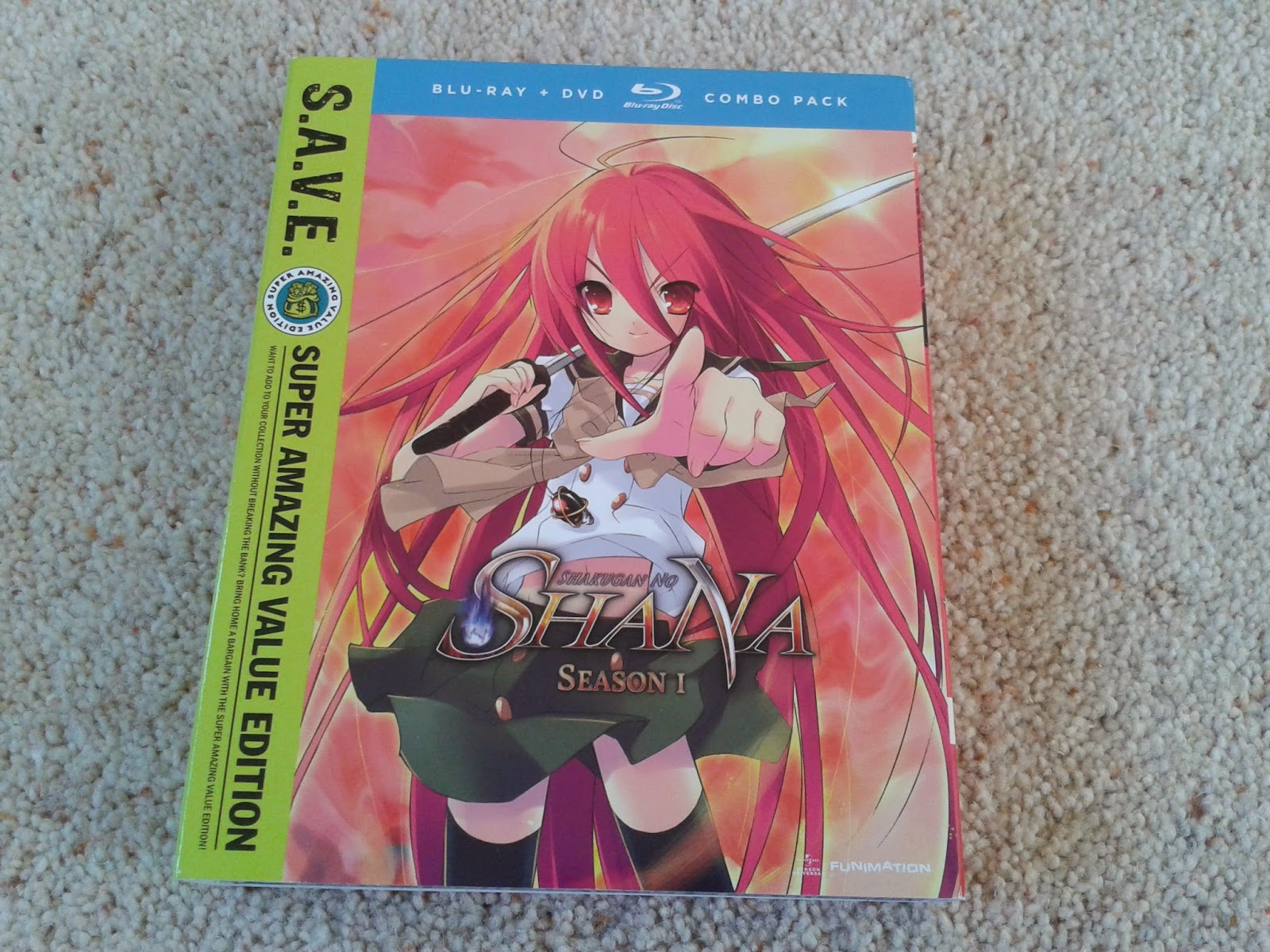 After obtaining the recap movies I was even more urgent to watch the newest instalment in the franchise. So after returning from my holiday I instantly bought it (via Amazon Japan). Three days later, the set arrived. My third Japanese BD-Box straight from Japan. I present to you all - the Rebellion. 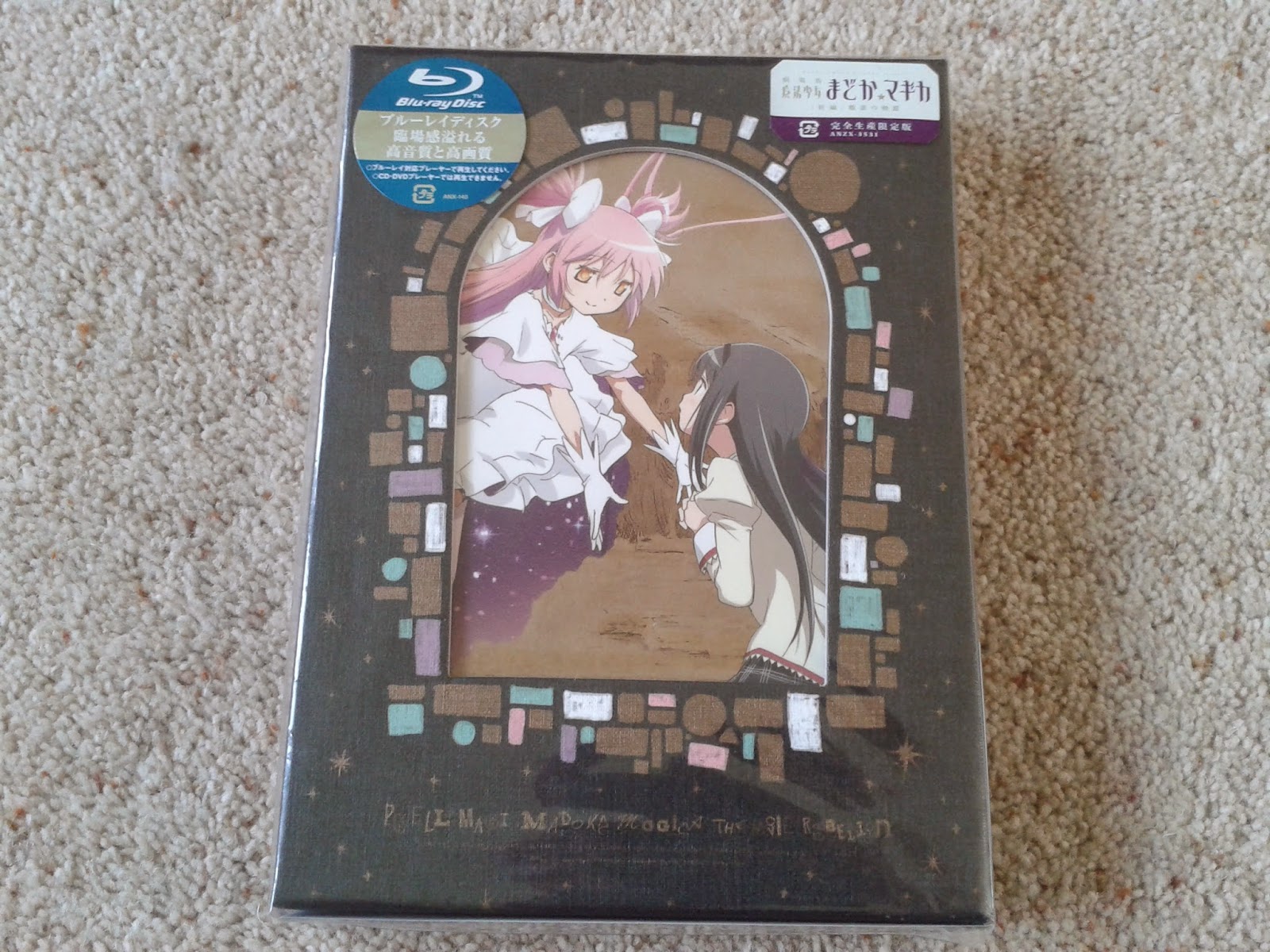 Hello to all, it's NormanicGrav here and I am going to provide a quick update for what's been going on lately over the past week and what has been planned for the rest of the year.

First of, I was away for a week on holiday and just returned so everything should progress like normal (like it has always been). In case you ask it was a great holiday, not abroad like a lot of people but it was a nice holiday resort in the middle of a forest (you can probably guess what it is if you live in the UK).

Now getting to the point of the matter.

- Otaku Collection July 2014 didn't appear because I was away on holiday. Instead it will be merged with August since I didn't have much arriving in that month, they were big items but merging the two will make the post more interesting.

- The reason for the lack of unboxings was because there was nothing arriving at that time or I didn't get anything so I apologise if you were expecting one every day since I generally do get a lot of titles (2014 so far has been the most out of all the years I've been collecting). I can tell you now that I have ordered another item which is expected to arrive this weekend or early next week. I will be getting some more over throughout this month.

- In terms of Limited Edition collecting, I pretty much nearly completed my goal of getting all of the Funimation sets that are available (about 12 left to pick up, not including Attack on Titan Part 2 since that's been ordered). Once I've done that I'll go for whatever is accessible next, Viz Media titles are probably the next ones since they cost just about the same.

- Aniplex wise, I will not be getting the US versions for Kill la Kill and Madoka Magica Movies. A few reasons with this decision. Starting with Madoka Magica, I already own the TV series in their LE form which is fine but the films themselves aren't getting the better treatment. The Japanese Limited Edition set for The Beginnings/The Eternal had both films with the booklet and OST while the US version only provides a lackluster booklet, no OST, both Blu-ray and DVDs and DTS audio (not DTS HD like the Japanese dub) for the English dub. As such I made the decision to go for the Imported versions instead as seen with my recent unboxing just before I left for my 1 week break. As for Kill la Kill, Aniplex are releasing the sets in 5 parts for about £45 with Set 1 and £50 onwards likely for Set 2-5. They each have the same treatment with the Madoka movies by which the box is not chipboard and has lackluster content. Set 1 does have an OST but they're Remix/Rearranges which generally aren't as good as the original soundtrack. So instead I'll be getting the upcoming Anime Limited UK release which is split into three parts with 8 episodes each, over 100 pages of an artbook and a planned chipboard artbox for Part 3. Each part goes for an MSRP of £59.99 on Blu-ray alone.

- UK wise, I will be getting some more UK titles in the future. The purchased sets include Ultimate Edition versions for Gurren Lagann, Mai Mai Miracle and Patema Inverted; all of which have chipboard box with dozens of content (i.e. Movies & Parallel Works on Blu-ray for Gurren Lagann, OST & Translated Booklets straight from Japan for Patema Inverted). I also have plans for HAL & Royal Space Force: Wings of Honneamise as well as the secret untitled film that is currently scheduled for December (suspected to be Giovanni's Island). As for Manga UK sets, I'll get some of their older titles and that will be it for them as the other versions are more superior. MVM I'll be leaving out due to cover designs and QC issues.

- Light Novel and Manga wise, I'll get some in the Autumn time. I would like to get the anime stuff out of the way before I get some more manga and novels.

I hope you will all forgive my lack of appearances on my blog but I may do some more experients some time like News on UK/US sets and much more. And I will be updating the BD/DVD regions whenever there's major changes.
at August 04, 2014 No comments: