It's been a long time since I unveiled my collection of anime and manga. It's been about 9 months since I had made an update and because I'll be going back to University quite soon I figured I should probably make another update now before then.

The first row on my shelf contains a majority of my anime released in the UK. The difference with the last update was that I moved all of my special UK releases (particularly the ones with slipcases) to the rest of the standard Blu-ray sets. I pretty much aimed to try and get quite a lot of rare anime Blu-ray releases from the UK and I managed to get quite a few; The Animatrix, Appleseed: Ex Machina and Blood: The Last Vampire.

Outside of the more rarer releases, I picked up Blood-C: The Last Dark from Manga UK via HMV as an exclusive Collector's Edition set that could only be bought in those stores, The Garden of Words from Anime Limited since the Makoto Shinkai Collection was delayed for various reasons (dub costs and getting Blu-ray rights to 5 Centimeters per Second and Children Who Chase Lost Voices), and also 2 Studio Ghibli films I figured I might as well add to my collection; Arrietty and From Up on Poppy Hill.

Personally I feel like avoiding the UK versions because they quite inferior to the Japanese and North American editions but there are some titles I will be picking up sometime in the future (and I will support Anime Limited for going into the right direction for the UK anime industry).

The second row contains the rest of my UK anime sets in addition to my Asian Cinema collection and a quarter of my US sets. I did my best on getting up-to-date and as a result I was able to get quite a lot of interesting sets for this collection. Let's start off with the Asian Cinema collection, the only sets I added this year were Battle Royale with the director's cut on Blu-ray in addition to steelbook versions of 13 Assassins, Rurouni Kenshin and Zatoichi. I do plan on picking up Yurusarezaru Mono since I watched the film in cinemas and really enjoyed it.

Now notice how I have R.O.D. next to the Asian Cinema collection. Well that's because I personally don't like the set itself, it doesn't hold up in comparison to the Chipboard artboxes everyone else have released and I want to wait for a Blu-ray release before I watch the series itself. Since the series is now unavailable in terms of licensing (Manga no longer have the OVA while MVM no longer have the TV series), I hope that either Aniplex re-releases the set or Anime Limited rescues the series for Blu-ray.

Last year I picked up the Anime Limited set for Perfect Blue and I loved how they have done the packaging so I'm really happy they have improved this with their next releases Durarara!! and Tiger & Bunny: The Beginning. Now Durarara!! does have some on-disc flaws but they did confirm the discs will be replaced with corrections and an additional signs subtitles for the English dub fans, currently estimated for an early 2015 release. I have yet to watch the Tiger & Bunny movie simply because I should watch the main TV series first but it's really up to anyone's choice as the film recaps the first few episodes and goes on a different direction afterwards.

Next to Tiger & Bunny is my first Japanese Blu-ray Disc Box - Gunbuster vs Diebuster: Aim for the Top! GATTAI!! which contains the theatrical versions for Gunbuster and Gunbuster 2: Diebuster with English subtitles (and French) in addition to a translation of the booklets and subtitles for the Extras disc. A lot of people prefer Diebuster but I actually enjoyed Gunbuster way more probably because it had a really good story and animation in addition to the character development as the film progresses, I would say the film is one of my favourites.

Now excluding Baka & Test Season 1, Black Lagoon, Clannad and Ga-Rei: Zero on this part of the row, the rest are new additions to this collection. Appleseed wasn't released on Blu-ray in the UK so I was happy to own it in addition to the inclusion of the Ex Machina English Dub cast. Attack on Titan Part 1 which while I wasn't very happy with the concept, it's still a nice set and I'm very happy an artbox option was available for Part 2. I also picked up Baka & Test: Special OVA Collection (because Funimation was releasing the franchise on DVD only for S.A.V.E.), Black Lagoon: Roberta's Blood Trail, Fairy Tail the Movie: Phoenix Priestess, One Piece Movies 8 & 10, Heroic Age (one of the last remaining sets from it's re-release before the series went onto S.A.V.E.), Shakugan no Shana: Season 1 (the S.A.V.E. edition that happens to use the original stock), Fairy Tail Parts 1 to 5 (Part 1 had no slipcover so I removed the others for consistency) and Heaven's Lost Property Season 1.

The third row contains all of my Funimation Limited Edition sets (minus Attack on Titan which is on Row 2). In the previous collection update I only had 8 sets, now I own 30 (29 on Row 3) and boy what a pick up.

The rarest new additions that I bought day one (or close to) but sold out immediately after were Devil is a Part-Timer, Haganai NEXT and Psycho Pass.

A majority of my sets are still in very good condition. Shana Season 2 has some marks due to Amazon's packaging but is still standing and I hope it survives long term. Psycho Pass had a technical design issue (unbalancing) and some others had the same thing due to packaging but overall it's nothing.

Since I like to collect these types of sets I only have 9 more Limited Edition sets that I aim to pick up before Q1 2015 - Aesthetica of a Rogue Hero, Appleseed XIII, Aquarion EVOL, Blood-C, Code:Breaker, Karneval, Senran Kagura, Shakugan no Shana: Season 3 Part 1 & We Without Wings. I have sorted pre-orders for Attack on Titan Part 2 and High School DxD New which are 90% likely to sell out.

The December line-up has not been fully revealed but I am convinced that HyperDimension Neptunia will be another one to add (and also Danganronpa if they silently add that title) however I will probably not go after Cowboy Bebop as I hear interesting things about a possible Ultimate Edition for the UK version that could include the film and soundtracks.

The final row for my anime contains the entirety of my Aniplex and NIS America sets. I should start off with my Light Novels/Manga on the left since I couldn't fit them on Row 5. I really enjoyed Haruhi and Sword Art Online and I will be picking up more (the Light Novel for SAO is way better than the anime adaptation). Berserk I've been meaning to add in a long time but the volumes were pricey and went out of print at the time but they got reprinted and I was able to buy the first arc in the series (which I finished instantly). I will try and get more volumes in the future.

Now for the anime, so let's start with Aniplex. You know I already own the Madoka TV series and Baccano! but I now have Bakemonogatari and the Japanese Blu-ray Disc sets of the Madoka Movie Trilogy added to my collection. The imports I figured were much better than whatever Aniplex of America had to offer and I'm happy with the set especially the soundtrack which is fantastic. Bakemonogatari I loved so much and I will try and get Nisemonogatari before 2015.

Next to the Aniplex sets are my NIS America Premium Edition sets. All of them were recently added and half of them are now out of print (Ground Control to Psychoelectric Girl, Love Live! School Idol Project Season 2 & Toradora!) so I am very happy to own all of them. I picked them up because I wanted something anime related that was Premium/Limited and I went with NISA since I haven't gotten anything from them yet throughout my anime collecting. I do plan on getting more NIS sets but I won't be getting every single one of them due to their size and pricing.

Finally my manga collection. Here is a majority of my manga since I moved the Box Sets out of the way for space. I barely picked up a lot since I wanted to prioritise on anime because they were more likely to sell out than manga would, but I did get quite a few to continue or start with.

I added more volumes to Blue Exorcist, Higurashi, Yotsuba&! and Highschool of the Dead Omnibus Colour Edition. I'm now officially up-to-date only with H.O.T.D. since the series is on hiatus. I also picked up the second compendium of the Walking Dead comic book series in preparation for Season 4 and 5 of the TV series.

In addition to the on-going volumes added I started buying the first volumes for Jormungand, Pluto, Tenjo Tenge and the VIZBIG of Rurouni Kenshin (which at the time was rare until it got reprinted). I also bought the omnibus for Another.

Next to the Shelf: 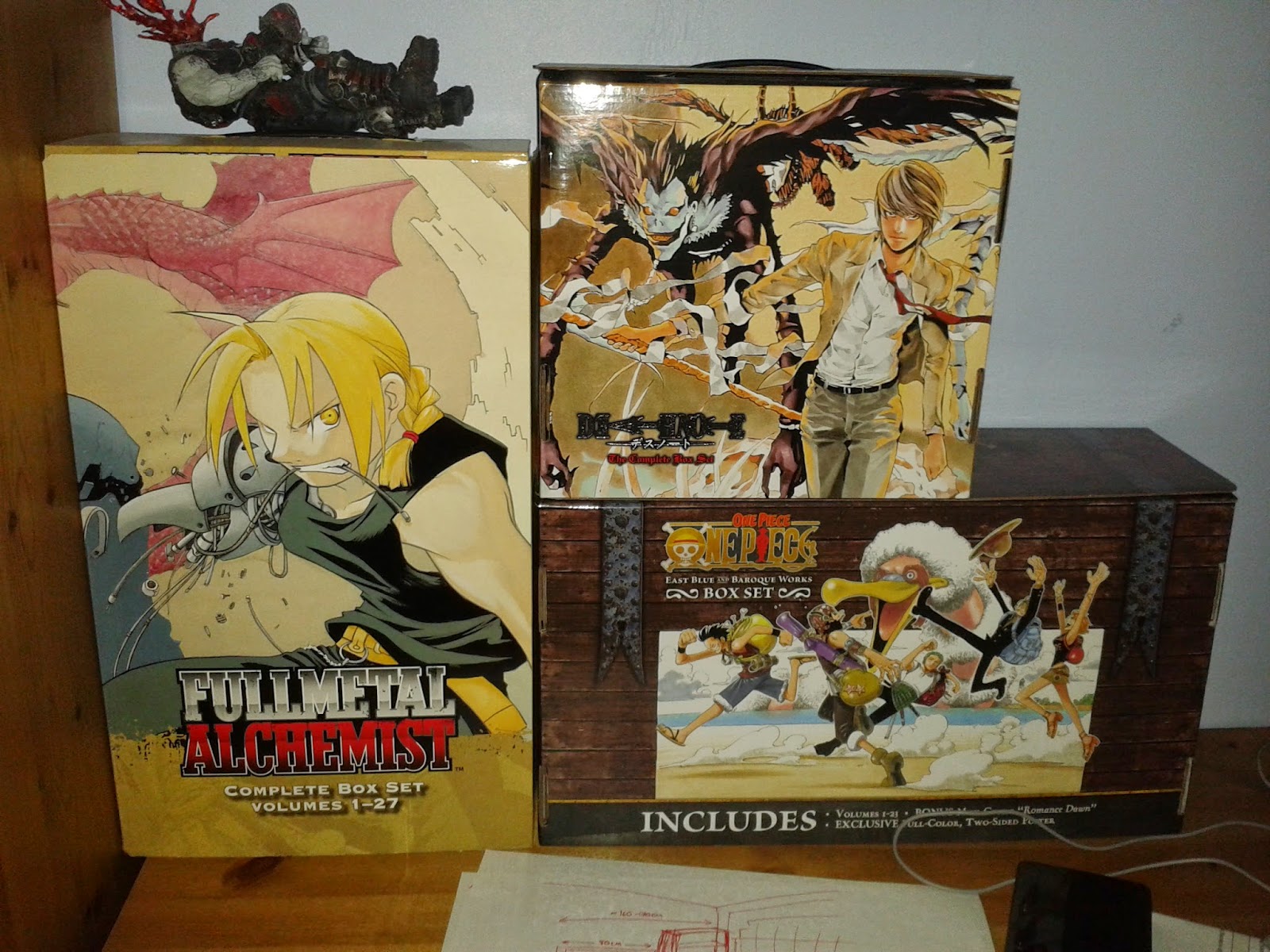 The final part of my collection are my Manga Box Sets. Last time you've already seen Death Note and One Piece which I both got in December but I also bought the Fullmetal Alchemist set which included all 27 volumes and it's 5th Light Novel; Ties That Bind. I do have 1 more Box Set planned for Christmas but for now no other plans during the Year 2 Semester 1 season.

That is all for my anime and manga collection update I hope you all liked the screenshots they aren't the best due to the lighting but I try my best at these things. I will have a fourth update during the new year.
at September 08, 2014